Bilingual Babies and Executive Function – A study recently published in the Proceedings of the National Academy of Sciences suggests that early exposure to multiple languages increases abilities in executive function.  The researchers looked at infants in their home city of Trieste, an Italian city with a history of being at the crossroads of multiple cultures.  Babies from bilingual homes did better at tasks of executive function in the study – basically meaning that they demonstrated precocious abilities to switch attention compared to control babies.  You are more than welcome to go to this story from the Economist for more on the study.

Preschoolers Language Skills Partly Tied to Classmates’ Language Skills – A research team from Virginia and Ohio State longitudinally looked at over 1800 preschoolers to obtain their results, which are generally self explained from the headline.  The researchers mentioned the Matthew Effect in stating the importance of focusing on early childhood language skills.  They also described research demonstrating the correlation between receptive language and classroom attention (strong and very important).  A short synopsis of the study is here.  A more comprehensive report is here.

Richard Nisbett and Environmental IQ – Nisbett, a prominent cognitive psychologist, has been getting good reviews for his book – Intelligence and How to Get it; Why Schools and Culture Count.  Nisbett counters hereditarian claims that roughly 75 to 80% of IQ is inherited with his own view that the number is probably less than 50%.  In addition to multiple other points, Nisbett points out the mistake often made in drawing erroneous conclusions from twin studies, such as those that find that the IQs of separated adopted twins correlate higher than twins living with biological parents.  We now better understand that the homes of adoptive parents themselves correlate extremely highly with rich, nurturing environments in which to raise children.  This book review from the NY Times, gives a real good feel for Nisbett’s book.

Scientific Consensus on How the Brain Processes Speech – Scientists may be reaching a consensus on how the brain processes speech.  Josef Rauschecker, from Georgetown University, claimed that his studies of primate and human brain imaging confirm his decade old theory that speech is processed roughly along pathways traveling from lower to higher functioning neural regions.  These pathways parallel similar visual pathways, but run from regions around the auditory cortex to regions in brain’s outer cortex.  This report from Science Daily, on Raushecker’s report in Nature Neuroscience, provides more info.

Not news or research, but here is an interesting recent Q and A in Newsweek on memory with a Harvard psychologist.

Now that I’m back, I’m planning on starting off with some brief bits concerning language and learning that I probably would have posted on over the past month or two, had I been here all along.

First this:  New findings from researchers at the University of Washington strengthen a suspected link between early childhood TV exposure and delayed language development.  The study looked at 329 children and found that an increase in TV time correlated negatively with both attempts to speak from the children, and words used by their caregivers.  This one has been reported in various places, such as USA Today, this link at LiveScience and in this link from ABC News.

Interestingly, a study published in the March issue of Pediatrics seemed to 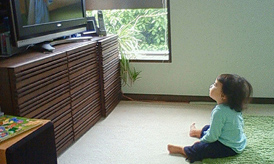 arrive at an opposite conclusion, while criticizing the widespread nature of the American Academy of Pediatric’s (AAP) often repeated recommendation that children should not watch any TV before age two.  Their conclusion was that duration of  TV watching has no cognitive effects on children under two.  This study, from researchers at the Center on Media and Child Health at Children’s Hospital Boston, surveyed 872 mothers on their childrens’ viewing habits.  After controlling for maternal age, income, education, language vocabulary scores, marital status, child’s age, gender, birth weight for gestational age, breastfeeding duration, race or ethnicity, primary language, and average sleeping duration, the researchers found no correlation (negative or positive) between TV watching and scores on tests of cognition and language.  More on this less reported study can be found here.

So, what to make of these seemingly contradictory studies?  Actually, both studies do add support to the advice many pediatricians have already been giving parents.  Because it may be unreasonable to expect that parents will completely turn off the TV for two years, the content and type of TV viewing is essential.  It may be more practical to advise parents to watch educational shows, and more importantly, watch these shows together, and talk about what it is that they are seeing.

Well, that post went longer than expected, so my brief accounts of other recent language and learning interest will have to come next.