What’s Wrong With Our Goals for Following Directions? (.)

Goals for following directions are commonly seen in Individualized Education Plans (IEPs) of language disordered kids.  Anecdotally speaking, they’re probably the most common language goal.   Most of them tend to have some serious problems though, which perhaps we can illuminate from a quick analysis of one or two examples.  And there’s one thing that’s really conspicuous by its absence.  We’ll see if we can use these examples to figure it out.

Example 1:  “Paul will follow two step directions in the classroom for three consecutive days.”   What’s wrong with this?  Plenty, actually, but one thing especially.  Let’s say that for three straight days Paul is handed some trash, and after receiving the directions, “Paul, take this to the trash can and throw it away,” he does it.  Goal achieved, right?  There’s two steps and three days in the classroom, after all.

But what if Paul is twelve years old?  What if Paul has been throwing away trash like this for years?  Maybe he has done it so often, he knows what to do merely by giving him trash.  He may not have even been listening to the directions.  In this case, Paul has not been taught, nor has he accomplished anything that he wasn’t already able to do, despite having “achieved his goal.”   The goal did not include something measurable that he wasn’t already able to do.  And there still is that one thing that’s seriously missing.

Example 2:  Mary will follow multi-step directions in the classroom or wherever at some percentage.  Okay, this admittedly is a softball example, but it’s one I’ve seen plenty.  What’s wrong?  It’s not specific enough.  I’m assuming it means more than two, but it doesn’t really say.  Again too we run across the difficulty of the fact that no two directions tend to be equal in difficulty.  “Get the ball and give it to me!” and “Please walk to the board and write the answer below the date,” are both notably two step directions.  But they’re vastly different in difficulty.  Which leads us to the one biggie that’s missing in these goals, and almost all following directions goals that I’ve ever seen.  It’s the language itself.

END_OF_DOCUMENT_TOKEN_TO_BE_REPLACED

Idiom of the Week

What idiom is this not? (Click picture for answer)

Skepticism in Communication Disorders – A Tale of Two Techniques

…it is far easier to come up with an idea than it is to do the grunt work of scientifically verifying if that idea is a good one.

Facilitated communication (FC) is the technique of using a helper’s hand to guide a severely disabled person’s fingers or hands to type or point at a letter board.  It is a practical requirement that the disabled person must not be able to communicate in any other way.  The facilitator is trained in ways to help hold and support, but theoretically not guide, the patient’s hand to enable communication.  FC was first enthusiastically embraced by many media outlets, and by the general special education community in the 1980’s and 1990’s, before being thoroughly refuted by research, and denounced by every major association that matters,  including the American Psychological Association and the Association for Science in Autism Treatment.  It seemed also that in many cases, these facilitators’ extreme desire to help their students led them to trump up stories of parental sexual abuse – stories that they didn’t seem to realize that they were concocting.  FC seemed to generally fade from the public consciousness, but lately it has been revived.  Unbelievably, Syracuse University helped its reemergence under the re-branding of “supported typing” by promoting its founder, Douglas Biklen to Dean of its School of Education, and by renaming its Facilitated Communication Institute as the School of Communication and Inclusion.  (Maybe these people have been trying to jump on the autism explosion gravy train that earlier FC had just missed?)

Here is a fantastic summary of facilitated communication.  Here is the American Speech-Language Pathology Association’s (ASHA) denunciation of FC.

While oral motor therapy has been less – let’s just say – notorious than FC, it has certainly garnered its fair share of criticism and controversy.

END_OF_DOCUMENT_TOKEN_TO_BE_REPLACED

Idiom of the Week

What idiom is this not?  (Click picture for answer) 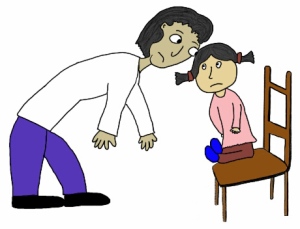 With this list no one can ever again say, “I don’t have any ideas for teaching language.” 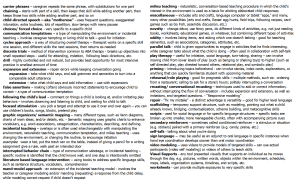 Some Myths of Vocabulary Learning

These vocabulary learning myths were from a Missouri Speech-Language and Hearing Association presentation this past spring by Shirley Patterson and Eva Trumbower.  I think the first two myths are especially notable.

rehearsal/role playing – obviously good for pragmatic skills – just some of the examples of how this can be used to practice language skills include: ordering from a restaurant; calling to ask for a store’s hours; politely interrupting a conversation

recasting/ conversational recasting – any of a number of techniques used to add or correct information, without interrupting the flow of conversation – includes expansion and extension, as well as imitations, and targeted questions. – “Responsive modeling”